Picking a public fight with powerful legislators isn’t a typical PR strategy for a giant corporation, but that’s Amazon’s latest move as a crucial union vote deadline arrives. Over the past few days, the retail giant has turned into a Twitter troll. Amazon has tweeted childish insults about Senators Bernie Sanders and Elizabeth Warren, who chairs two banking and finance subcommittees. The fallout has been ugly — and puzzling.

An emotional response to a business threat

Amazon-watchers are wondering exactly what it hopes to achieve with the Twitter war. It’s an emotional and undisciplined communications approach, to say the least. And as Kara Swisher opined, it’s pretty clear that founder Jeff Bezos is pulling the strings. (Swisher calls it “top-level chucklehead.”)

Amazon has always been sensitive about bad PR around its treatment of workers, of course. And the optics have not been good since it doubled down to meet record demand fueled by the COVID lockdown. Last March Amazon fired a New York warehouse worker who organized a walkout over safety issues and even leaked an internal email describing the employee as ”not smart or articulate.” It also terminated two Seattle workers who spoke publicly about warehouse conditions.

Amazon warehouse workers in Alabama have been voting by mail for the past seven weeks on whether to organize. As the voting period ends, the company has ramped up public attacks on its critics. If the union prevails, that warehouse will be the first among Amazon’s US workforce to organize – but perhaps not the last. And that appears to be Bezos’s fear and the reason many speculate he urged his team to lash out on Twitter. 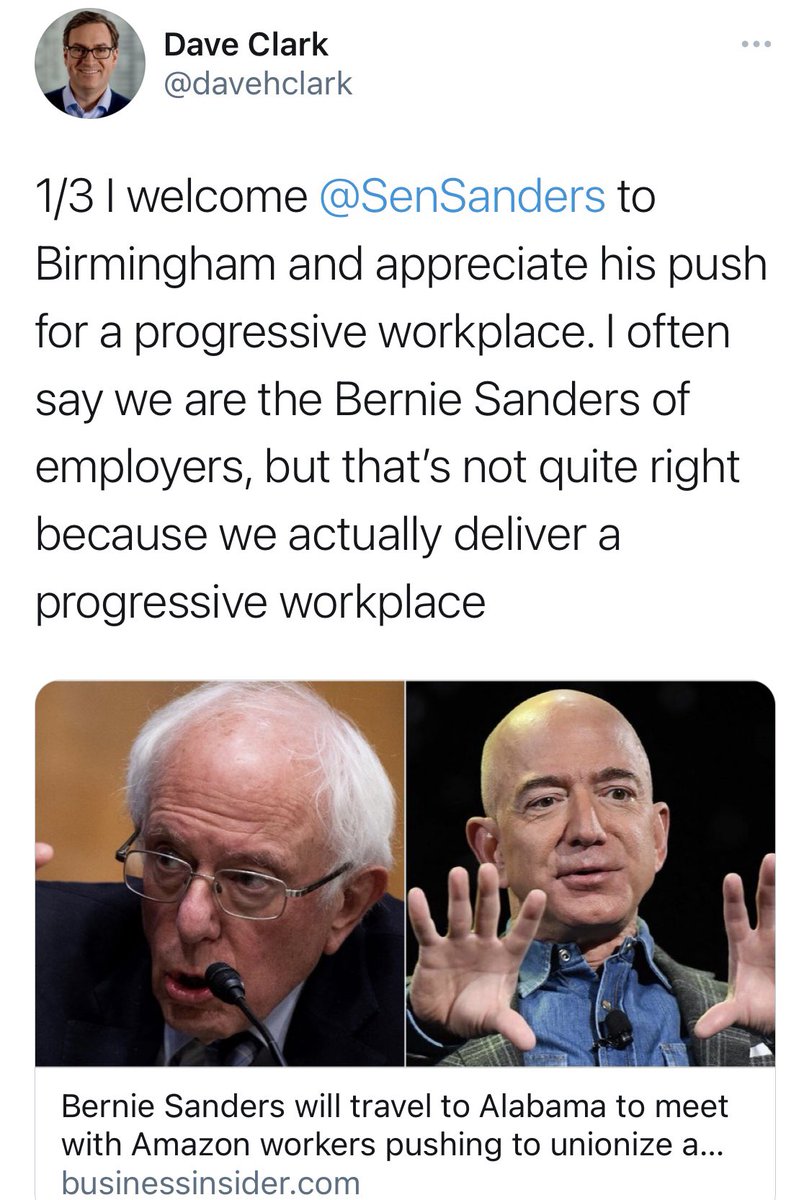 Things escalated after Senator Warren accused Amazon of paying “close to nothing” in taxes. At that point @AmazonNews got into the act, firing back to defend its tax payment history claiming Warren was trying to “break up an American company so that they can’t criticize her anymore.”

The trollish tweets undermine the messaging that Amazon spends millions in PR and lobbying to communicate. And it does have a case to make – a minimum $15 wage, worker benefits, hazard pay, millions spent on worker protections during the pandemic, and more. But the Twitter war has sparked a backlash, as well as nasty new stories about Amazon workers not being able to urinate while at work, and, well, worse. Are tweets about peeing in bottles better than the noise about a union at the Alabama warehouse? Yech. 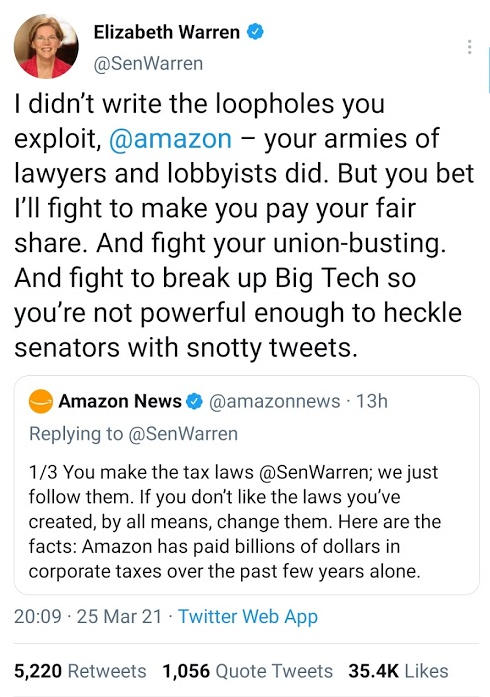 Amazon clearly sees the Alabama vote as a make-or-break moment in its drive to quash union activity. The vote count starts tomorrow, and over the past month an array of celebrities have spoken out in favor of the union or visited the warehouse to show support. President Biden notably mentioned it in a video address on March 1. Given the timing, the nasty-tweet offensive makes the company seem almost panicky.

Amazon is the Goliath here

Attacking one’s critics can work when there’s a David v Goliath situation. But a company Amazon’s size just looks thin-skinned. It’s the second-largest private employer in the country, for heaven’s sake, and trolling legislators in public is just counterproductive. At a time when Big Tech is under real pressure, “snotty tweets” aren’t a viable PR strategy. They don’t set up the company for any future attempt by Congress to regulate or break it up. Besides being a bad look, its public posture also conveys fear, which isn’t good for future union negotiations. No matter how the Alabama vote turns out, the retail giant would do well to listen to its critics, get off Twitter, and focus on more proactive and productive ways to tell its story – both privately and through strategic PR.